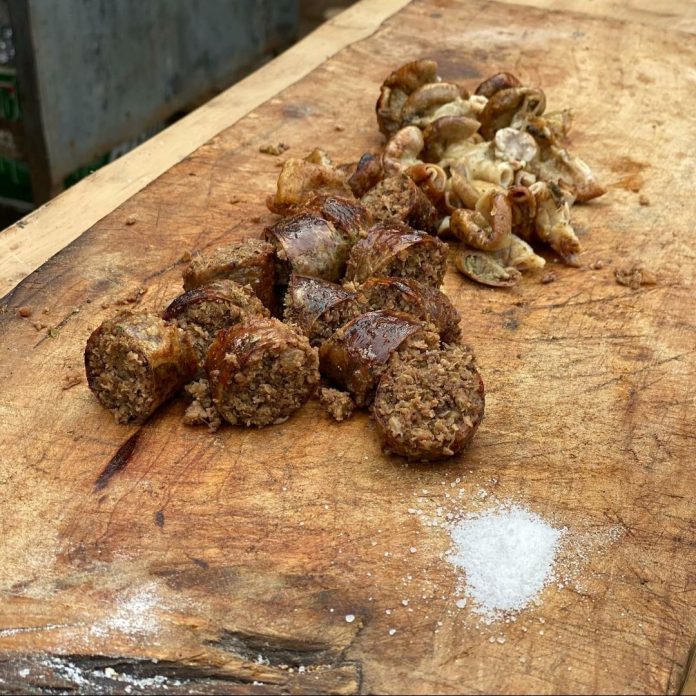 For some strange reason, her watery bloodshot eyes remained unblinkingly interlocked on me. She totally refused to look away. It is as if she wanted to penetrate in and discover why I had old gastric ulcers. As a final resort, just when our eyes coincidentally met again, she beckoned me. Who could dare walk to a stranger when summoned for whatever reason; especially in Kayole-a place that is feared by both the living and the dead! Not me! I ignored her careless looks and beckons, and almost catapulted away…I was late!

She called out, “Lucy, come!”
Literature students from the University of Nairobi, not anywhere else, will tell you that such statements are classified as commands!

I had to look back. I interrogated her facial expressions to check whether we had met at Campus, at church, at my former work places…It was seemingly my time to analyze her.

Her short hairstyle befitted her chocolate complexion. She had these clumsy yellow-metal earrings that I thought weighed heavily on those two poor ears…. all in the name of enhancing beauty. You could easily tell that she had make-up on because the skin colour of her hands was a total contrast to that of the face.

She had a green jacket on top of a cream t-shirt and a faded pair of jeans that held unto her tightly. Regardless of my tactful efforts, I couldn’t seem to remember where we had met. Neither did she want to remind me. She kept smiling sheepishly as she waited for me to conclude my analysis. She had obviously seen me struggle…I momentarily blamed the few sips of alcohol I had had in campus. Could it have been that the side effects of alcoholism were upon me? Or too much of fried chips masala and kuku had finally lowered my IQ! Damn, I should have eaten those vegetables when I had the chance!

All my senses screamed at me to walk away. They had their reasons which I now strongly support. For the uninitiated, Kayole was and is still a place I could advice anyone to be careful when visiting [no offence]. Eagle-eyed youngsters who have been bled in theft and crime can estimate your worth just by looking at you and how you walk even before they steal from you. I had heard of several stories and narrations where people had been robbed on broad daylight as everyone else walked past them un-interested. There were devil-daring massacres also in those regions that often shocked the entire world.


I had been forced to go there because of the NGO I had started that helped young mothers secure food for themselves and their young ones. On that day, I had just left the centre where we usually met and was in search of a shop from where I would buy more milk. We had ran out of milk.


Anyway, the lady called out my name twice.

Stranger lady: Lucy, why are you avoiding me?

Me: I am sorry. I can’t seem to remember you.

Stranger lady: You don’t know me. I have been sent to you.

I walked away.
I didn’t want to talk to idiots who had heard my name from some other place and were playing tricks.
I even clicked and snarled as I turned to go. I had decided that if she was going to insist on following me and trying to con me( for that’s what I thought she was doing) I could fight her to death.

She began shouting the names of my family members.

Okay, she now had my attention. I turned to look at her again. As if to convince me further, she mentioned my date of birth and other personal information.

Me: How do you know me? Who are you? What do you want?

Me: Stella, how do you know me?….before I could finish blurting out, she jumped in…moving closer to me.

Stranger lady: You are about to be stabbed to death by two men who will be approaching you in just about 30 minutes from now.

Me: How do you know?

She didn’t answer me. She went straight into my history. She told me things that I had never told anyone. Secrets I had promised never to reveal. They were so deep!

Clearly, she had won the battle. She had my undivided attention. Had she turned to go, I swear I could have ran after her to ask how she could know such things.

I found myself lowering my tone and moving closer to her. “Who are you?” I asked almost in tears.

She didn’t immediately reply. She stared into my eyes and read my weakness (or so I thought). She accessed the impact of her words on me and smiled knowingly. As if to assure me that there was no way she was going to share the information with anyone, she extended her hand and tapped my left shoulder slowly…. “it is alright. That information is between you, I and fate”!

She proceeded to tell me that there were dark forces that were against me. She declared that the devil and his machineries had decided to come after me to end my life. She mentioned the name of our neighbour back in the village and assured me that she was responsible.

There were a lot of thoughts in my mind at that particular time. I had even started sweating…refusing to accept that I was a victim of the devil. Just the other Sunday, I had fasted and asked for special prayers from my church mates. I had even prayed that morning and asked for the protection of the Lord. Plus, I really didn’t “see” what the devil could want from me…but, I was still scared.

Stella: I want to help you.

Stella: Let’s go( she pointed to a lonely corner) and pray.

Looking at where she was pointing, I saw about 7 “unique” boys just nearby…almost all of them were staring at us.  Some were seated and others were supporting themselves against a wall, idly…as if waiting for someone. From that distance, I would see their ugly dreadlocks and dirty attires.

I did my quick calculations and concluded that it could have been a con game and that they were waiting to steal from me and even rape me. I strongly said no even though I was still disturbed. I couldn’t understand how she knew those deep secrets.

I wanted to leave. She saw it and calmly said, ” let’s try this…”
She looked around and saw another lady walking towards a bus station that was just nearby.

She told me that the lady had taken her watchman to court because she had suspected him of stealing her Kshs. 30,000. She informed me that lady’s watchman had not stolen the money and that it had been taken by her son, Justin. She wanted to prove to me that she was a true “prophetess” by foretelling the secrets of the other lady. She was also going to “help” her.
I waited to see if the lady was indeed going to board a vehicle or that she was pretending to pass by. When she was about to go into one of those loud Matatus that had just stopped, I rushed and begged to talk to her.

I quickly assured her, ” I don’t need money or anything from you. Please come, let me talk to you for just 5 minutes.” When I added the part that I would pay her fare, she came down of the vehicle she had already boarded. The conductor looked at me fiercely for taking his customer. I didn’t care.

Meanwhile, Stella was still at the same position I had left her. However, when she saw me approaching with the lady, she called her by name. Even the lady’s attention changed…her eyes “moved” from me to Stella and back severally. “Who are you and what do you want?” She asked in Swahili.

Before I could say anything, Stella told her some bits about her life and concluded with,” I know who stole your Kshs. 30,000 just recently. But, I want you to discover it by yourself.”

Unlike me, the lady was completely convinced of the “powers” of Stella. She really seemed eager to know more. Stella asked her to leave her handbag with me and walk a few metres away from us saying the Lord’s prayer repeatedly. She assured her that by the time she could be back, the answer would have been revealed to her.

She threw her handbag on my hands before I even decided whether it was safe at all to trust complete strangers. I almost refused. I wanted to refuse. However, by the time I was making my mind to say no to holding her bag, she was a distance away whispering “loudly” the Lord’s prayer. She walked away fast and then slowed as the distance between us kept increasing. I convinced myself that she could trust me. I was going to protect her handbag. I was not a thief and so the handbag was safe with me.


She suddenly turned and started running towards us. When she got closer, she shouted “Justin”, “Justin”, “Justin”. She quickly narrated that he had stolen the money on a Thursday. She confessed that she felt terrible for getting an innocent man behind bars for 10 days. She suddenly snatched her handbag from my hands and rushed to another Matatu claiming that she wanted to quickly sort out her mess.


When she left, Stella looked at me and said, “your life is in danger”!
“What do I do?” I asked amidst some kind of anguish.
She paused for a few seconds. Looked at me in my eyes and said,” fate has to tell you by itself. Leave everything here with me and walk as that woman did. By the time you are back, you will know exactly what to do!”

I intelligently took out the Kshs.7,000 phone and the Kshs. 210 that was in my other pocket and handed it over to her.

She didn’t take the stuff. She just looked at me angrily and said, ” what about the Black berry and the Kshs. 1,502 in the other pocket! And the receipts and ID?”

How could she know the exact amount I had in my pockets! Even the receipts?
I was scared. I decided to go away as quickly as possible. But even before I turned, she said….”you will give me everything”!

That’s the last thing I remember….


I later found myself at Kariokor  market. My feet and trousers were extremely dusty. I was sweaty and so tired. My throat ached of thirst. Worse still, vehicles were hooting at me loudly and everyone looked at me weirdly because I kept going on and off the road sluggishly.

I don’t understand to date what happened!