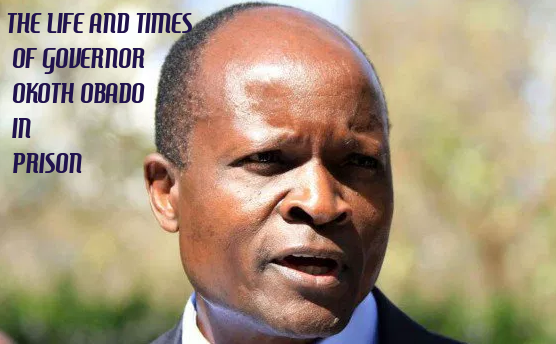 Prison life can be wild and for softened money maniacs like Governor Okoth Obado. It is a chilling experience designed by the arch-enemy himself; Lucifer Satan. This mischievous deceiver is to blame for the woes of governor Okoth. Who until last month had interchangeably enjoyed the warm bosoms of different women as he also milked the benefits of being rich and
The lavish lifestyle that welcomes one after clinching the gubernatorial seat is no secret to the likes of Okoth…however, to jump from such a luxurious life to the confinement of 4 ugly corners better referred to as prison is demeaning, depressing and almost heroic…only the brave could want to continue living.

There are 3 things that will definitely shake the governor …

1. Food
Prison food is not meant for entertaining tasting palates; it is for survival. Thus, it is almost an offense for coriander (dhania) and tomatoes to be found in food. Otherwise, the self-made prison chefs will boil beans and add 20 of water with just salt. You will be lucky to find a single bean seed in the soup, whose purpose will be to accompany the “too soft” piece of ugali that will be acrobatically thrown into your dirty plate a distance away…as you queue. Supper is served at around when other Kenyans will still be in traffic. The elusive breakfast of pure-white maize meal porridge is considered with the same dignity as a cup of Macchiato (coffee). Miss it and die…

For governor Okoth whose life has been decorated by soft-baked chicken and deep fried fish sauced in 48 unique ingredients and served by beauties in expensive hotels in Maldives, Sao Paulo and other fancy places…prison food can be the worst form of human abuse.

2. “The homosexuality secret”
Governor Okoth Obado’s main enemy in prison must be the “sexual assaulters” he is likely to encounter. These eager enthusiasts have spent sleepless nights without the comfort of women and have since adapted to use what they can find! No wonder, we hear of action-packed stories of men who quench their sexual thirsts through raping new comers and prison bootylicious weaklings.

These perverts will look at you lustfully and hungrily…it is worse for prisoned men who have been endowed with big waggling, bobbling, wobbling and shilly-shally buttocks!

I hope they will respect the governor and let him come out a virgin!
He shouldn’t face the cruelty of sex pests who have been ‘starved’ for years. These no nonsense prison admirers should have lots of respect for such a man who governs millions of people in a free world.
Having enjoyed the late Sharon’s unmentionables…whose death is the reason he has to go to prison albeit for a few days, the governor might also be eyed by the participators of this dirty game.

check this out also…

3.Bucket (ndoo) toilet
In a prison room with several men, it is almost bewitching and offensive when one decides to walk to one of the rear corners and sits right in front of your eyes to poop! For starters, every prison room has a bucket for all the “dirty work”…or pooping as millenials call it.

After having beans for supper, men of all ages will take turns going for their long call …there they will produce all sounds of toned farts. They will almost smoke the room and choke you to death…first-time prisoners are treated to a free musical karaoke at night of different disgusting farts.

For a governor to ingest such kind of poison for several days…it is almost unthinkable! Nature will demand that he also goes to the toilet, at the same corner and seat where all the 35 men have sat…the olive scented wash rooms with warm water and antiseptic hand washing soaps is a luxury that cannot be afforded in prison.

Not to mention the skin cutting cold that prisoners have to battle with every night on those cemented floors with little protection from blankets if there be any, for new comers…having been used to imported Italian duvets whose warmth is measured to comfort the rich and their wives or mistresses, cold will definitely soften the governor’s ego. The blood-thirsty bedbugs and razor shaped mosquitoes will fight to get turns in sucking his new and warm blood. These two stingy creatures can extol at least 3 litres of blood per night. Worse still, the humiliation and depression, resultant from this case is a painful torture that will have to torment governor Okoth Obado in prison.