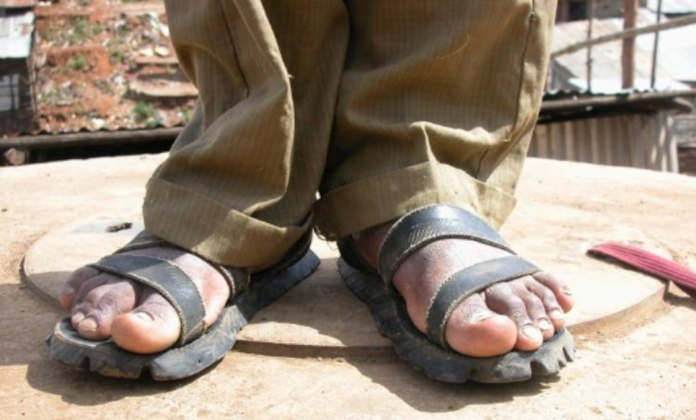 I was absentmindedly passing through Kenya National Archives or, just Archives as it is famously known in Nairobi when a heavy hoarse voice startled me back to reality, “Praaaaaaaaaise the rord“! I’m sure that the speaker had intended to say, “lord”…but, who cared? At least not me! I almost walked away…almost…but there was a familiar note in the voice of the “preacher” that made me stop and turn back.

I had branched right and was facing Tuskys Beba Beba. Those who were close to me as I turned back got momentarily shocked and clutched to their wallets and purses afraid that I was about to snatch them. I didn’t blame these upper lower-class people. As one of them, I knew how strangely a salary of Kshs. 67,000 disappeared before the 6th of every month. That’s if you had a “salary”!

I planted my buttocks on the pavement of Archives like the hundreds of people who sat there idly. Uniquely, most of them were young people; extremely busy on their phone…maybe betting, on social media, or playing games; I don’t know folks. What I do know is… they paid no attention to the preacher.

By then, I had already known him. It was Wesley, my desk mate from Campus.

I didn’t want to spoil his party, so, I sneakily sat. I had also pulled out my phone and was multitasking between Twitter and him, yet, I managed to hear everything he said!

“Enhe, sadaka ni muhimu! Utabarikiwa Let’s go to the book of 1 Corinthians 10:13. It says that blessed is one who gives.”

When I checked the verse, it was different…and read… “No temptation has overtaken you except what is common to mankind. And God is faithful; he will not let you be tempted beyond what you can bear. But when you are tempted, he will also provide a way out so that you can endure it.”

Wesley continued admonishing and fighting the devil. He told us how he had been saved from demon-possession. He narrated his near-death experience in the world of drug and sex addiction where most of his friends had died.

After he had built enough sad emotions in our hearts; he called for people to give sadaka.

I saw him flash out a small bag from his left pocket. He started begging people for “anything” [chochote]. Once or twice, I heard coins clink in his bag. If my Math was correct, he had received about 8 coins. Knowing Nairobians, I could say two things. One; those were coins of not more than Kshs. 10. Secondly, he must have been so lucky to convince those eight people!

When he got to me, I dipped a note of Kshs. 500 into his bag while maintaining my eyes on the ground. His sharp magnetic eyes might have counted the zeros in the note that I gave out. He unintentionally “forgot” to move. He stood stationed at the same spot with the curiosity of wanting to know who I was. All that time, I heard him say, “Asanti ndugu, barikiwa! Bless you!”

I answered with my face still lowered, ” Asanti Wesley Nyamwamu”. He speedily stooped low. He had to know who it was.

When we finally met, face to face, he fought for several minutes not to laugh his lungs out and disappoint his “customers”. So, he held my hand and whisked me away as he quickly transferred the money he collected from the bag into his wavy pockets. When we had gotten out of sight, we burst out with laughter for about 16 minutes.

Wesley was one of the most adventurous people I knew during our 6-year Campus life…We were not in the school of medicine and should have cleared in 4 years but, we got a few challenges…alcohol or booze must be directly blamed…I hope you understand. He loved his life and lived to the fullest…even lecturers knew that Wesley’s comfort came first and CATs came last. No wonder, through some unique way, he found a way of getting all his marks despite the fact that he failed to sit for some tests and exams. He rarely attended class but, missing him at his favorite booze joint every Friday was almost impossible. The few times he missed he was either in Central police station or admitted to a hospital for over-drinking. Yet, he graduated with a second Class-Upper Division degree along with those who asked questions in class!

It was therefore “funny, almost unexpected” when I found him preaching. Not that it can’t happen…but, there was just something about it that never seemed honest. True to my thoughts, we matched straight to a bar at River road where he ordered two cold Tuskers and used my Kshs. 500 note to pay.

The terrific speed with which he gulped down the drink made me notice that hunger had found solace in his stomach. I stole more few glances at him. His brown skin had changed to almost dark. It was loose and covered in rashes. His flesh had melted away leaving behind a skeleton. He had no energy left…maybe just enough to lift beer bottles and a small bible interchangeably.

One or two hairs on his head had turned white. I don’t blame his biological make-up; it had everything to do with the spirits and alcohol he drank. Worse still, he looked lonely and sad.

Me: Wesley, what happened bro?

There was an evil silence of about 20 minutes in which he ordered two more beers. We kept drinking in silence.

Back at Campus, I was the one guy who Wesley listened to. We were good buddies and we respected each other. Even after Campus, we still kept in touch for almost 2 years before we lost contact.

Seeing him in his current situation, after about one year and a half, was so sad. I felt indebted to help him. I remembered the good times we had enjoyed. We drank together every weekend. However much he drank or smoked, he couldn’t engage in a brawl or any kind of argument. His was laughter and happiness. On several occasions, he carried me home…by several occasions, I mean almost every weekend.

Later when the beers got into him a little, he narrated how he had turned into preaching to get a meal and a bottle of liquor. He never had a house nor a family to go to…he occasionally slept at a friend’s house in Kariobangi. The other times, he woke up from a bar floor.

Anyway, after a few more bottles of Tusker. I called for an Uber and left with him. At the time, I was staying at Don Holm with my wife and daughter.

We took back our daughter to our bedroom and left the room for Wesley. The first two weeks, he just stayed home showering, eating, and watching cartoons with my daughter. He never left the house…even when I suggested an eat-out. He liked warm showers…I didn’t mind when the bill came out triple. I just wanted him to enjoy and relax his mind.

By the fifth week, we had changed his wardrobe and bought him a laptop…he wanted to get his mind right with IT [he really liked coding].

I got him an internship about 3 weeks ago. The pay is Kshs. 13,000, a very tiny amount for a 32-year-old man, but he loves it so much. Plus, he gets to study and refresh his mind in IT. I asked his immediate boss to go slow on him and give him space to grow.

He still sleeps in our daughter’s room. My wife and I decided to let him stay as long as he wishes. He has never used any drugs since he moved in with us. My daughter loves him. She calls him uncle Wesley.